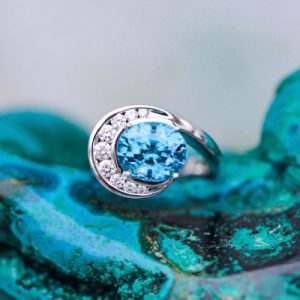 Have you ever thought about where your jewelry comes from? Have you ever wanted to know whether ethical mining practices were being used when mining for gemstones? Do you want to create an environment where local communities benefit from the jewelry business?

If you answered yes to these questions, you need to discover jewelry from Parle Jewelry Designs. Based in Idaho, Parle has spent decades promoting and advocating for ethical practices in the jewelry and mining business. It is the reason the company works with The Devon Foundation. The foundation started when several jewelers visited Madagascar and saw that people in the community did not have enough knowledge about gem cutting and crafting. The organization now works to find and train local people to work in the gem business and believes the effort benefits the economy of the community.

Parle supports that mission and wants the jewelry business to benefit local communities. Gemstones from the company’s “Sharing The Rough” collection go to fund The Devon Foundation and its efforts to train people in gem-cutting and other skills within the gem industry. As well, money raised from the sale of the gems goes toward paying for school lunches. The foundation is now solely responsible for the Kitarini school lunch program, which feeds over 500 young Maasai boys and girls, providing 10,000 meals a month. This way the stones within the collection improve the lives of everyone where the stones originated.

Parle has always wanted to be a source for good in the world. The company was founded in 1970s by Frank Farnsworth. Frank was born in New Hampshire and moved to Idaho as a young boy. He used to visit a local shop that carried rare stones and became fascinated with them. The shop owner taught him a lot about the different types of stones and how to identify them.

After graduating from college, Farnsworth began mining opals out of the Lost Deer Hunt claim in Spencer, Idaho. He loved the work and soon began selling opals at trade shows around the country. Over time, Farnsworth realized it was better to sell jewelry with the stones rather than just selling the stones.

“The jewelry was the wheels on the car,” Farnsworth said. “We needed the jewelry to make the stones go.”

Over the years, the business has grown and now carries a variety of jewelry with various gemstones besides opals. From amethyst to emeralds and topaz, Parle carries a line of jewelry to please everyone.

The company was originally called the Idaho Opal & Gem Corp. but adopted the moniker “Stones that Speak” when it took the name Parle. The saying was from a client who remarked: “Frank, I notice every gem you buy must speak to you.” That is how Frank became a world-renowned expert in gemstones.

The company is still headquartered in Idaho and has developed partnerships around the globe. Parle manufactures jewelry at a 17,000 square foot building and its products are sold at jewelry stores around the country.